This may be my last blog (or next-to-last) from Israel -- my abridged 3-month Sabbatical is coming to a close and Pesach is near. Marian and Ranana have arrived and we are preparing for Pesach. Here are a few things, and some pictures, that I am sure you will enjoy:

My formal classes ended on a Thursday, two weeks ago; at night we made matzah, from scratch. Enjoy the photos, which are in order. The she’murah (guarded) flour had to be precisely mixed with a certain measure of guarded water -- then hand mixed and kneaded, then sent to a pounder, then to rollers, then to those who perforated the matzah, then carried on wooden rods to the ovens -- the whole batch, yielding several blocks of dough, had to make it to the oven within 18 minutes. My job: the timer. 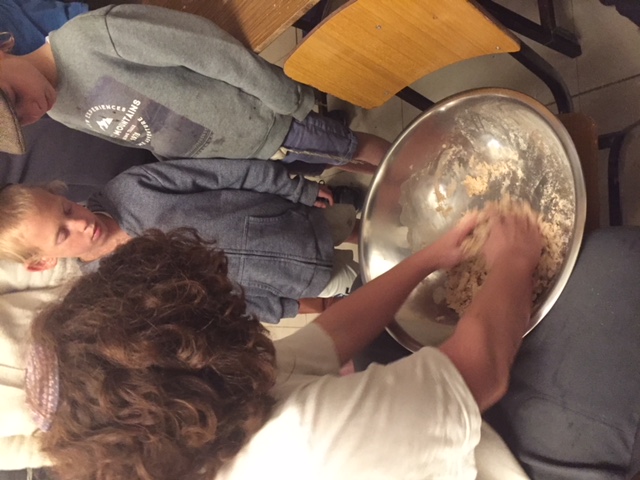 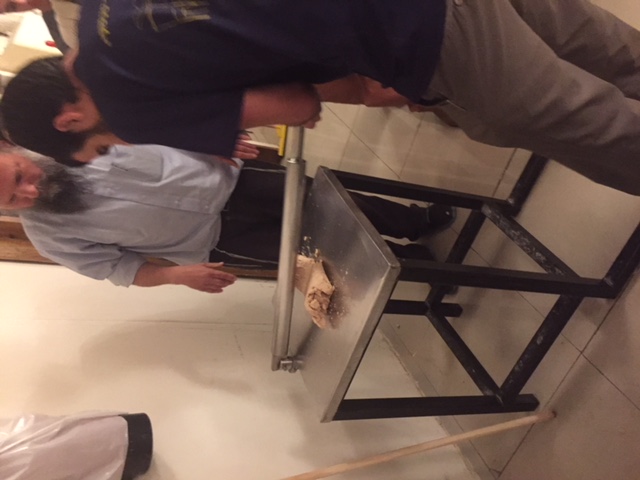 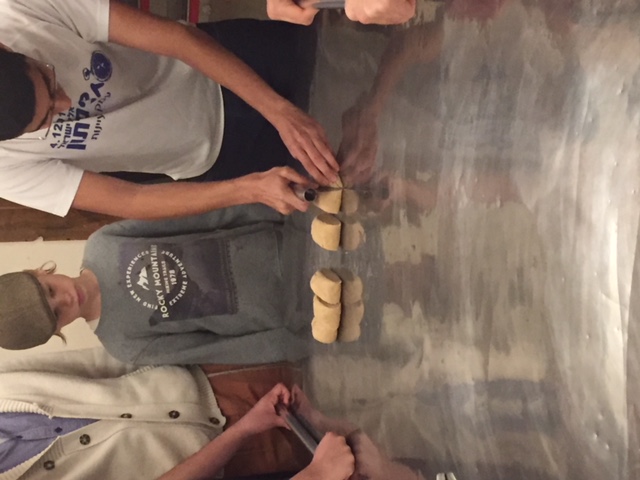 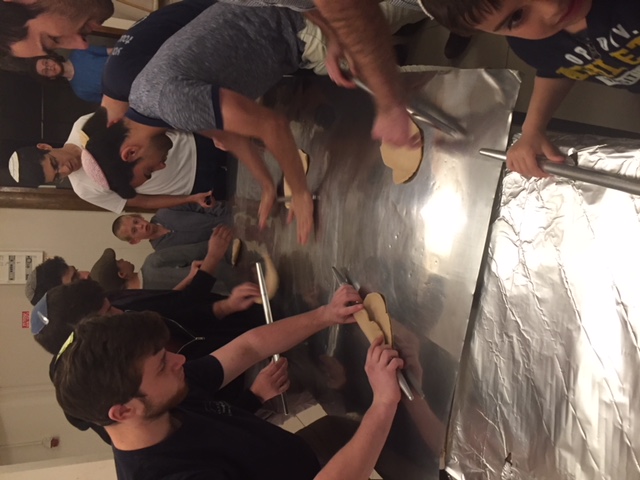 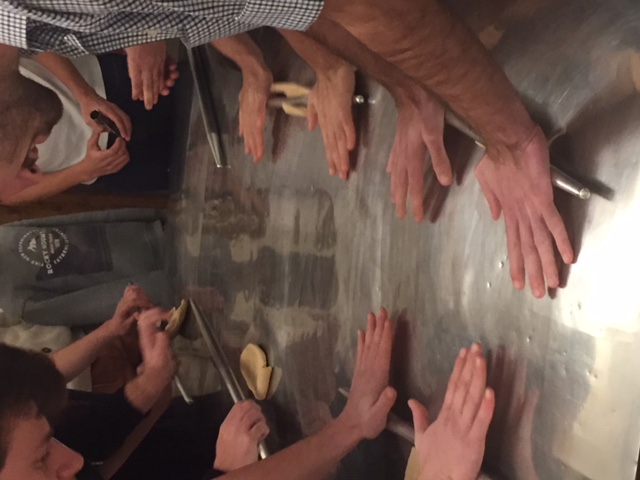 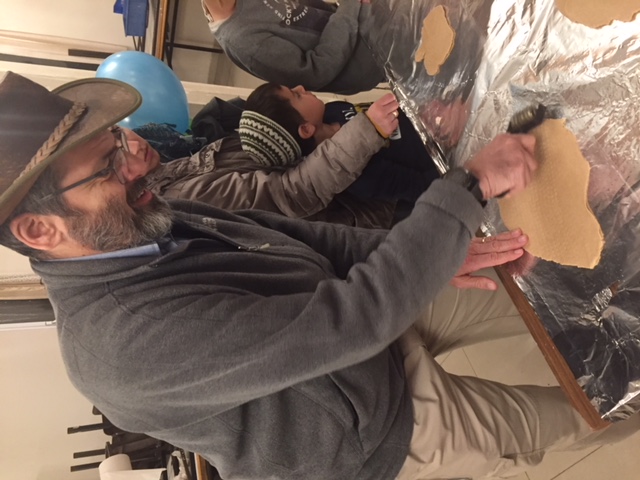 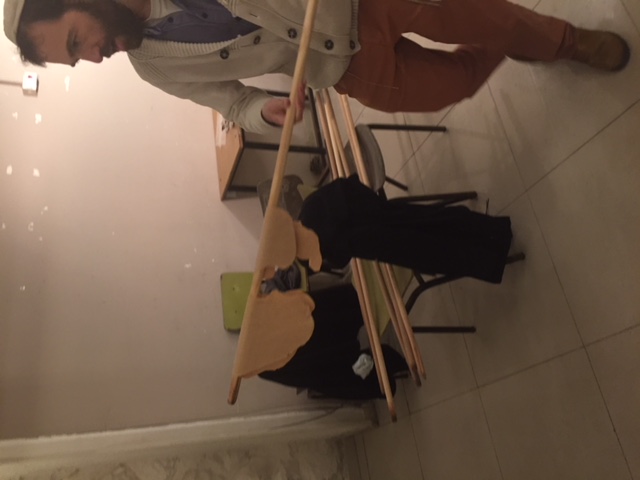 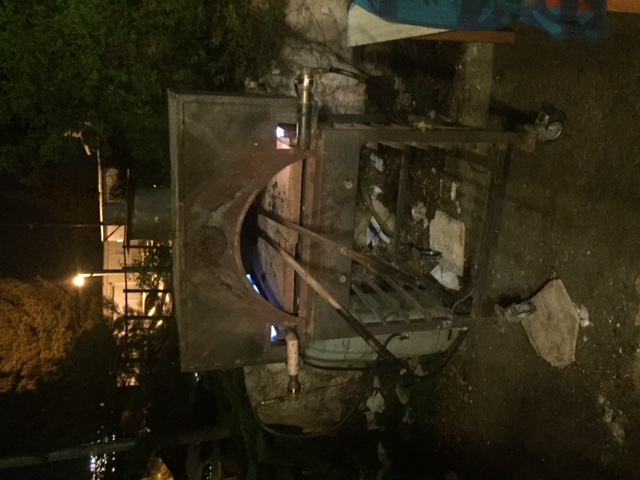 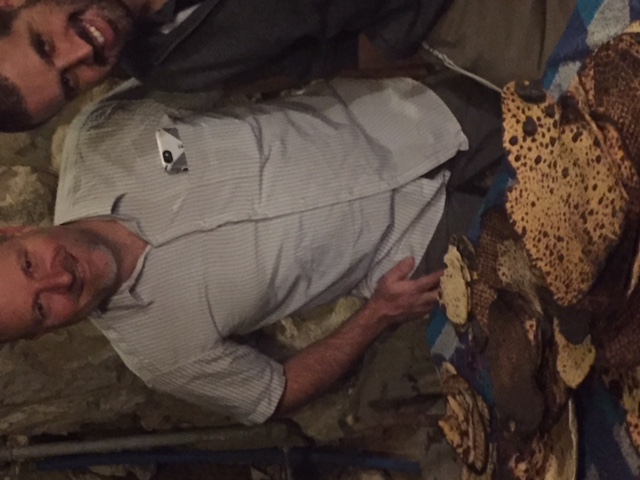 Pesach Away from Home

Each week, many synagogues receive and distribute a Shabbat magazine. In it are several divrei Torah connecting to modern Jewish and Israeli issues. The magazine also includes ads -- several advertizing homes or apartments, especially new construction, for sale. But by far, most of the ads (in January and February) were for hotels for Pesach.

Some of the ads feature popular places within Israel -- Tiberias, Eilat, Yerushalayim -- family opportunities. Again, these ads are targeted to the observant Jews in this religious weekly Shabbat magazine.

What is further surprising is that many ads promote Pesach trips outside of Israel. (Leaving Israel for Pesach! I want to be here for Pesach! -- after all -- Next year in Yerushalayim!) Destinations include Italy, Greece, Scandinavia, even Russia and other eastern European destinations, and the rest of Europe. And if that were not surprising enough -- how about Japan! And, here is the real head-scratcher -- Mongolia. Really? Do I ever want to visit Mongolia, and if I do, would it be for Pesach! (Quick -- Where is Mongolia? What is its capital? What is its largest city? What is Mongolian food? What is Mongolia’s chief export?)

My least favorite thing about Israel is its drivers. Of course, not all Israelis are bad drivers, but enough are highly aggressive, and it tends to make others more aggressive as well. Too often they weave in and out of lanes, speed, squeeze into lanes, crowd from behind, and do not signal, despite (or because of) bumper stickers stating: שמור מרחק / Sh’mor Merchak / “Keep (your) Distance.”

From what I can tell, an average of one person (or more) is killed every day -- including the elderly and children, soldiers, and others. (Jews killed by Jews is arguably worse than by enemies.) The loss of innocent life, so unnecessary, in a Jewish society that so values life (or should even more), is both sad and an outrage. With a little more care this cultural embarrassment and waste of innocent human life could be curbed.

Since I have been here, there have been several terrorist murders. A security guard by knife, another man returning from work leaving Yerushalayim’s Old City, others stabbed near bus stops, and some deliberately run over by a car. Yet, Israel is safe.

Safe? The military and intelligence is superb. They stop many more and intimidate other would-be killers. There is a military presence, in addition to the police force, that is visible at several checkpoints: On certain highways and entrance into certain communities. Efrat has one at each of its entrances. There are security guards in certain malls and other popular areas. Sadly, Israeli criminal violence exists, but it is less that what Americans experience.

In the Gush, where Efrat and other settlements are located, I see Palestinians regularly, either driving (identified by Palestinian license plates), working or shopping. Palestinians freely enjoy the supermarkets and other stores (I see many families shopping), and many Palestinian workers are employed - including various jobs at the supermarket -- from stockers to cleaners, cashiers, and even the butchers. One looked like Derek Jeter, so I found a picture on the internet and showed him and his fellow workers. The stories of Palestinian unrest and attempted and realized murders are true; but so is the underreported truth of getting along, employment, and prosperity.

But there is separation, as several pictures indicate. One is the red signs which mark the entrance ways into Palestinian villages. As the sign reads, it is against the law for Israelis to enter (for if they were kidnapped, it would add burdens to the society). Both roads are entrances to Bethlehem. In other pictures of villages to the sides of highways, you can see the fence that separates the two peoples. (These two are Palestinian villages a few miles away.) 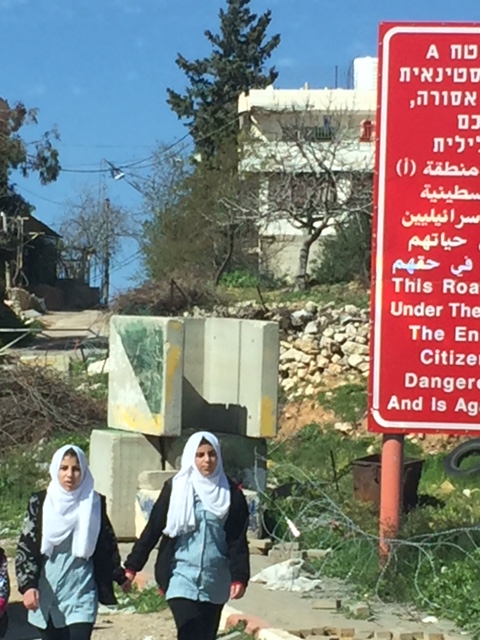 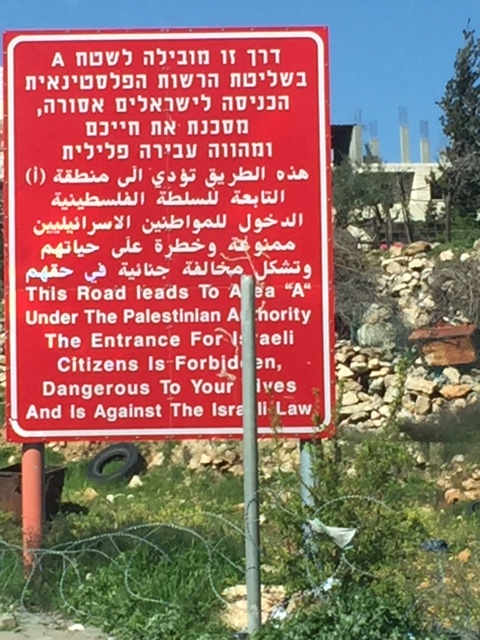 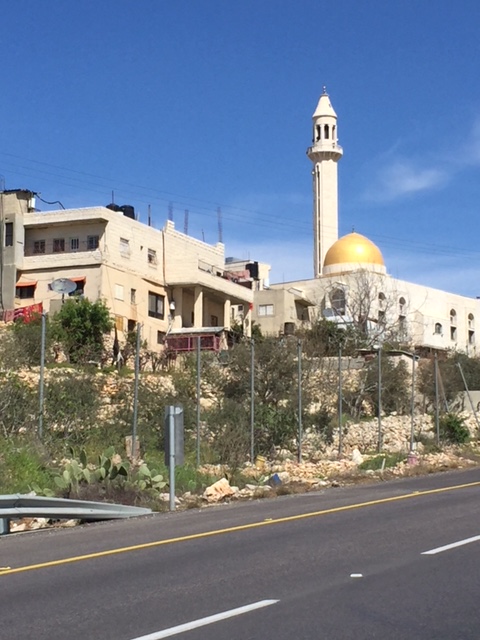 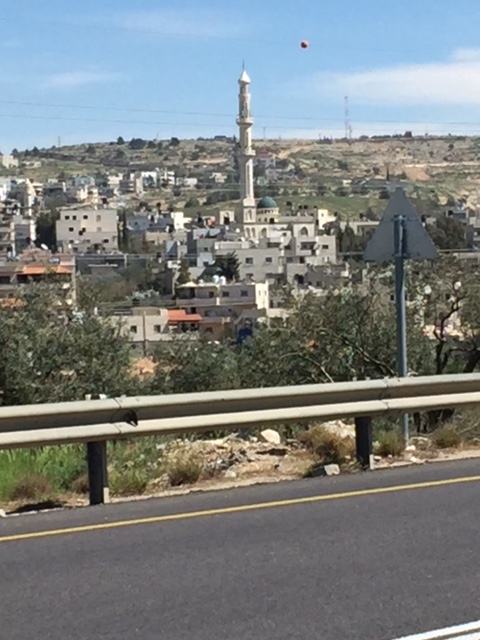 I had the privilege of meeting with two of the Ethiopian students that we have supported -- Hiyot and Zahavah. Both, it turns out, are third year students at Bar Elan University in Petach Tikvah, anticipating graduating soon, and yet they had not met until our lunch at an Ethiopian restaurant in Tel Aviv that Zahavah had recommended.

What was new for me was not only that it was Ethiopian food, but, as I found out when I arrived, as Zahavah was vegan, so was the restaurant. Those who know me know how different it must have been. The main dish came in a pizza pan; it was Ethiopian bread, called injera. One dictionary definition described it as a sourdough-risen flatbread with a unique, slightly spongy texture, traditionally made out of teff flour. I would add that is was soft, with perforations, looking like knitting, and had various vegan foods on top. It is not eaten with forks, but one pulls the bread wrapping the veggies, forming a mini-pizza-slice-like way to eat it.

Hiyot is from Ramle; one of six, whose parents came in the 90’s. She is studying digital map making. Zehava, from Hadera, now married and living in Petach Tikvah, is from five. She is studying ancient Semitic languages (the ones that shaped early Hebrew). 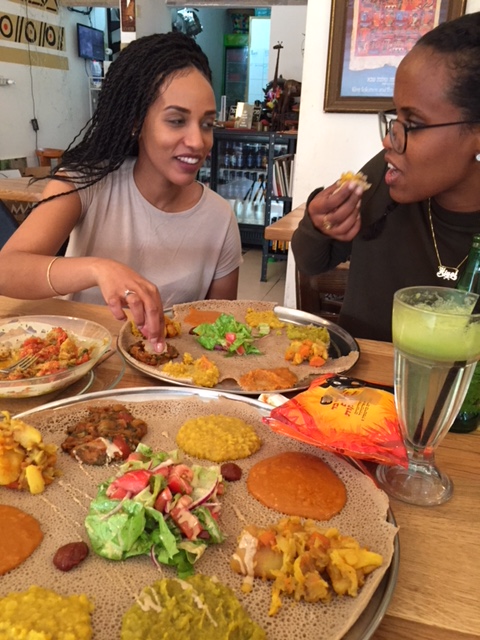 Last week I saw Micah umpire a kids’ baseball game; he is in charge of the umpires. There are hundreds of kids playing in this Efrat league. Micah also plays in a small softball league. On one hand it was nice; baseball is gaining some interest, I am told. The field, located within Efrat, is large and includes a soccer field as well, about a 20-minute walk from my apartment.

But there were some downsides. It was a bit too American for me. And when there was a dispute, mind you, in a league of young kids, each dad/coach, mostly with accents reflecting the New York area, argued--loudly. As umpire, Micah had to calm them down. 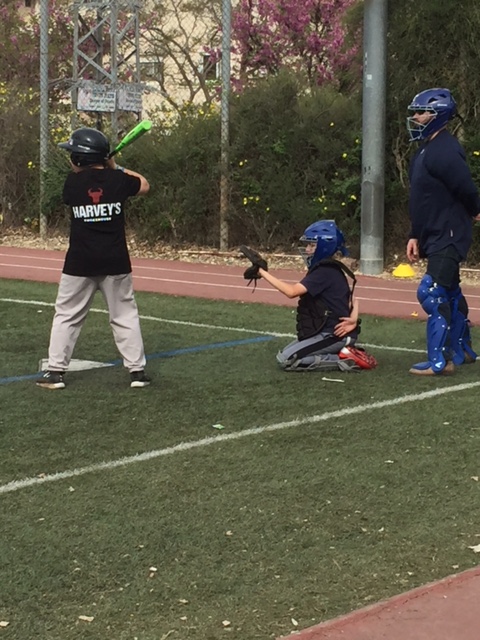 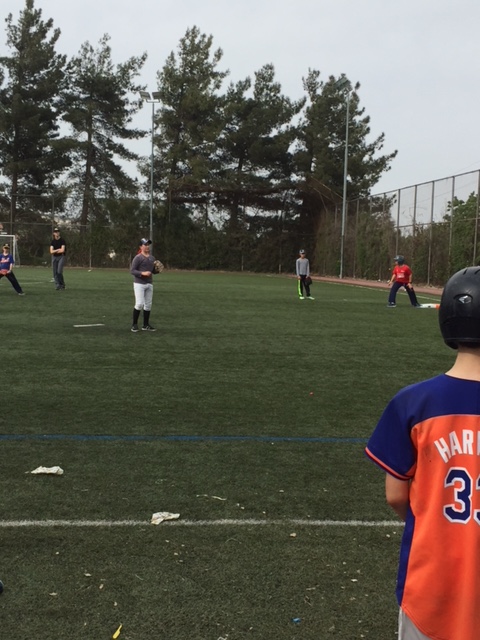 Several weeks ago, as I trudged up the steep hill, the last bit to the yeshivah, I suddenly see something that energizes me. It has nothing to do with Torah or Jews, in fact, the person is not Jewish and he is not even the central figure in my vision. Crossing the street are goats and lambs, led by a young Arab shepherd with his staff. It, too, is basic and real; no glitz. Baruch ha-Shem.

A few days later, as I was returning home, I saw a flock of sheep with an elderly Arab shepherd. I greet him and he greets me. We talk, in Hebrew, for five minutes or so, and I ask him ”How long has your family been here?” expecting to hear an answer of “hundreds of years.” Instead he says, “My father was from Yemen and my mother from Syria,” -- both places experiencing severe violence. Then he adds ”Baruch ha-Shem” that he is here, and in these very words, I feel a special kinship with him.

As his lambs graze, some begin to gnaw at the plastic garbage that is strewn around; he chastises the lambs with his staff. We both lament the ugliness that comes from such neglect. He tells me that he is also a contractor or builder, and hands me his business card that includes a picture of a house with a swimming pool that he built. I tell him a little about my family and he tells me about his. I learn that he is 52. (I’m 60; who looks older?) I feel older, but in a good way.

We exchange wishes for peace. Although I cannot be sure that he desires the same peace that I do, nor can he be sure of me, I leave confident that we are in peace. It was a brief moment of humanity that transcended nationality, religion, and politics. In my view, this is what my religion and nationality represents. Baruch ha-Shem. 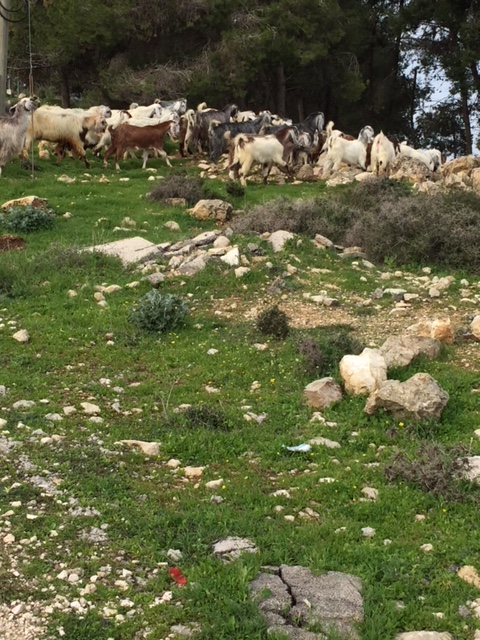 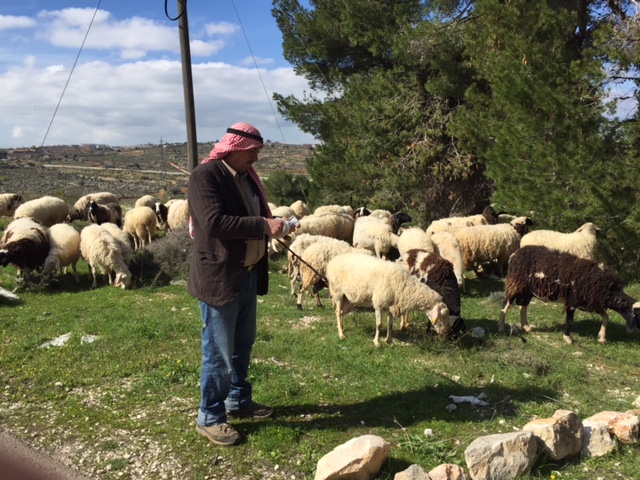 Working to End Racism and BLM

Delightful Music with a Meaning; and my article on Coronavirus and Halachah published by the UTJ tha

Interesting News Items, A Personal Reflection and Jeremiah (the prophet, not the bullfrog)

Yom ha-Sho'ah, more figures with personal reflections, a teaching from the Talmud

Pesach eve during Coronavirus 2020 -- with 2 artistic videos to enjoy

2-3 Weeks into Physical Distancing from Covid-19; Prayer & Pesach, and more

Working to End Racism and BLM

Delightful Music with a Meaning; and my article on Coronavirus and Halachah published by the UTJ tha

Interesting News Items, A Personal Reflection and Jeremiah (the prophet, not the bullfrog)